The Girl from Everywhere by Heidi Heilig

This is one I recently picked up completely spontaneously from the library a few weeks ago.  I hadn't heard a ton about it before I picked it up, but I did know bits and pieces and so was excited to get straight into.  I ended up reading in 4 days, which is pretty impressive for me, and absolutely loving it!

This books follows Nix as she and the rest of the crew on her father's ship attempt to gain a map back to a place from his past.  As you can probably tell, this book includes time-travel, something I don't think I have ever read about in a book before, and certainly never like this.  I loved the whole idea of this ship that navigates through time using maps from that specific point in history, especially as this allowed myths and legends to suddenly become real as well.  Even though a lot of this book does happen in one single place, I still really enjoyed seeing where they would travel to next and what adventures they would come across. 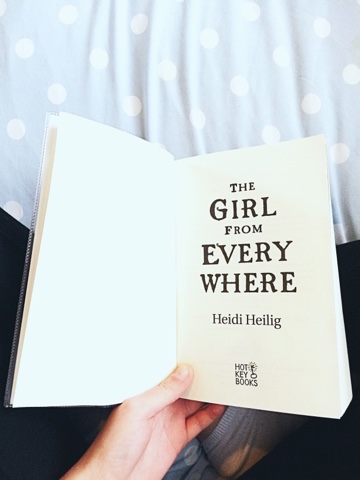 I also loved the centre idea in this as Nix's father attempts to find her mother, who he lost many years ago.  I liked how this created a family dynamic in this book, and, although I sometimes found Slate's manner towards his daughter a bit too distant, I did like how this allowed for there to be tension between them that changed as the story progressed.  I also liked how many different topics were all woven into one story so seamlessly that they were noticeable but never at the forefront.

Throughout the book, we meet many different characters, including both those on the ship and those we meet in Hawaii.  I loved the diversity in the cast of characters, with all of them so unique with different ethnicities.  In general, I have to say I liked pretty much all the characters, especially some of the members of the crew, who I found to be a great relief from the key plot.  I also loved Nix as a character, and found she grew alot in this book, allowing her to know exactly what she wanted by the end of this book.  I also thought she was just a really great, strong female character who thinks for herself, particularly towards the end of this.  But my favourite character of all had to be Kashmir, her best friend on the ship.  He was just such a fun yet dynamic character who could both provide some comic relief as well as some more serious issues.

The only character that really annoyed me was Blake, as I just didn't really see the motives behind alot of his actions.  I didn't really understand why he played a part in a story that could have survived without him, and why he suddenly kept popping up everywhere just to create an unnecessary problem.  On top of this, I just wasn't a fan of his character and found him to be annoying from the offset.

Sticking with characters, I have to say that I really enjoyed the romance in this.  I loved how it wasn't anything near insta-love and how even by the end it was still developing.  I found it to be quite realistic due to how slow-burning it was, my only problem coming from the addition of a love triangle. 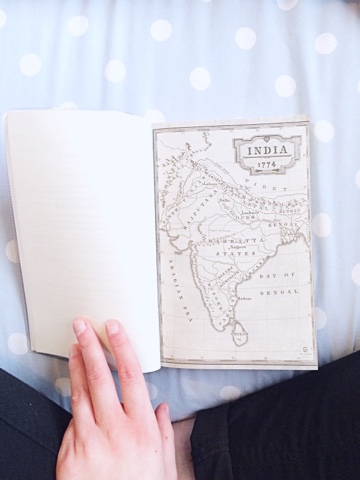 And, as always, I can't write a review without discussing the writing style.  Although there wasn't anything amazingly unique or different about the writing in this book, I did still find it extremely engaging once I got into it.  It was very easy to follow and helped the plot to move at a fast but reasonable pace and just overall made the story that much better for me.

I couldn't end this review without talking about the amazing settings that appear in this story.  One of the huge benefits of time travel is getting to see so many different and beautiful places, such as Hawaii and India.  I love book which includes travel, so I loved this aspect, as well as being able to see the history behind these places, an added bonus for me.  I really enjoyed taking a glimpse into the past, and although I don't know how accurate it all was, I did like the idea of it being based off actual events rather than being completely fictitious.

Favourite:
Character(s): Kashmir, Bee
Scene: The party
Quote: Sometimes a person has to let go of something to take hold of something else.

Relate a:
Song: We Come Running  - Youngblood Hawke
Trees - Twenty One Pilots
Other Book: The Geography of You and Me by Jennifer E. Smith
The Midnight Palace by Carlos Ruiz Zafon